“Intelligence plus character – that is the goal of true education”
– Martin Luther King, Jr.

Since the inception of major education reform in the 80’s, Singapore’s education system has blossomed into a globally recognized model for excellence – ranking 5th in the world in a 2012 education survey conducted by Pearson Group, and drawing commendation from Michael Gove, former education secretary of the UK.

While the nation’s education system has amassed its share of accolades, it has also forged disparaging cultures and practices that foster derogatory behavior and a poor sense for the marginalized. In Singapore there is a coming-of-age rite, driven in equal parts by schoolyard culture and an overflowing of testosterone. This rite essentially calls for boys to wend their way around the various red-light districts looking for transgender people in the area, and then dispatching their choice of abuse on them.[1]

I sat down with 4 young men (between the ages of 19 and 24) to examine their thoughts on the culture, its possible origins, and their take on it from an ethical standpoint.[2]

When asked why they had engaged in the activity one responded that he felt that he had a moral imperative to “scold and educate” the transgender people in the area.

The other commented that he had only gone along with it “because (his) friends were doing it” and that he had “not really thought about it” or its effect on transgender people.

When asked about where the practice came from, a number of theories were presented. One suggested that it was simply “human nature to insult people lesser than you” and that “sometimes (boys) just have to blow off steam”. Another postulated that the practice might be attributed to the education system, adding, “We were never taught about these kinds of things.” One felt that schoolyard culture was to be blamed, commenting, “It’s probably from the passing around of stories. The guys used to sit around and tell stories (of the times they harassed transgender people) then it just caught on with future generations”

When asked about whether they thought the practice was right or wrong one mentioned that he saw no moral wrong in it, concluding, “I think guys should just stay as guys and girls should stay as girls”. One felt strongly about it voicing out “something should really be done about it” but concluded resignedly that “(the culture of harassment) is too deep, it will be seriously hard to change”. Another stated that he had no opinion on whether the practice was morally right or wrong but noted, “To me, it’s just for fun. I don’t think the bapoks care.” [3]

When asked about what occurred during this practice some shared that it was mostly confined to the dispatching of obscene or derogatory slurs. These included terms like: “tranny”, “bapok”, “Chao Ah Gua” [4], freak, etc. Three of the men added that they had heard of instances where physical violence was dealt to the transgender people.

A narrative from two of the men was that they or their friends were swept into the practice by a group of friends. Some time after committing the harassment (ranging from a year to several years), they recognized that what they had done was wrong. The conversations led me to conclude that in most cases, the practice of harassment was fostered and encouraged by institutionalized discrimination.

This lapse in judgment (specifically committing acts of harassment against transgender persons) is reminiscent of the Stanford Prison Experiment, in which psychology professor Phillip Zimbardo set up a mock prison scenario, assigning a group of 24 men the roles of either prisoner or guard. Through the 6-day duration of the experiment “guards” subjected their prisoners to an assortment of abusive and degrading punishments, with one-third of the “guards” displaying sadistic tendencies. The abuse was so severe the experiment had to be shut down after 6 days, instead of the projected 7 to 14 day time span.

Zimbardo’s experiment demonstrates the ease of which abusive behavior can bypass a person’s moral framework when a person finds himself internalizing a role of power over a person with a socially constructed role of weakness. In the context of the education system, boys may find themselves put into a role of supremacy, reinforced by social norms and cultural attitudes, and may find the opposite role in marginalized communities such as transgender people.

The experiment is used to demonstrate the impressionability and obedience of people when provided with a legitimizing ideology and social and institutional support. In the context of Singapore’s education system, social support may come in the form of groups of peers who have committed acts of harassment against transgender people. While there is no direct institutional support for harassment against transgender people, it is implied in the form of laws such as 377A, as well as preexisting hostile attitudes to persons of the LGBT community.

Another reason the practice has been allowed to thrive is the poor representation and lack of discussion about LGBT issues. Many have noted that representation of LGBT people in Singapore schools’ sex education classes range from inadequate to downright exclusionary.

If left without rectification, the schoolyard culture of harassment against transgender people will enforce in future generations that violence, abuse, and harassment against marginalized people in society is permissible – the broader implications of this is that it creates a breeding ground for dehumanizing attitudes towards women, the poor, the LGBT community, and all other marginalized members of society.

I strongly urge the education minister to take assertive school wide action on this issue and to publicly call out this rampant schoolyard phenomenon for what it really is – an ugly culture of abuse with far reaching implications.

I’d also like to call upon everyone else reading this article to sign this petition calling for decisive action from the MOE to be taken to combat this issue.

[2] All names have been kept private.

[3] “Bapok” is a colloquial and derogatory term used to refer to transgender or gender non-conforming people. Specifically, for men who are deemed “too feminine” or “soft”.

[4] “Chao ah gua” is a colloquial and derogatory term used to denigrate homosexual men. It directly translates to “smelly homosexual”.

Sean Han is the Marketing Officer at Project X, a talk show host at TOC TV, and a part-time poet. 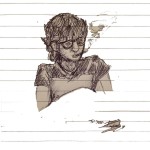